The company deals with cattle breeding, plant growing, processing of own raw materials. The products are sold through the chain of stores «Ridne Selo». Agrofirma Mayak is the largest taxpayer in the region and the largest employer with a number of professions (more than 150). Number of employees — 800.

Directions in crop production — cultivation of grain, technical, forage and cereals and vegetables.

Since 2006 the parlour «parallel» 2×16 (Boumatic) has been functioning with capacity for 1000 dairy cows, which are milked three times a day. Average daily milk yield is 29 kg per cow. Livestock is kept in 4 barns (2 four-row barns are reconstructed and 2 barns are built in 2005−2008). Another 3 livestock buildings were built in 2016−2018. In 2018, the rotational gates were reconstructed for the rapid exit of cows from the milking parlour. 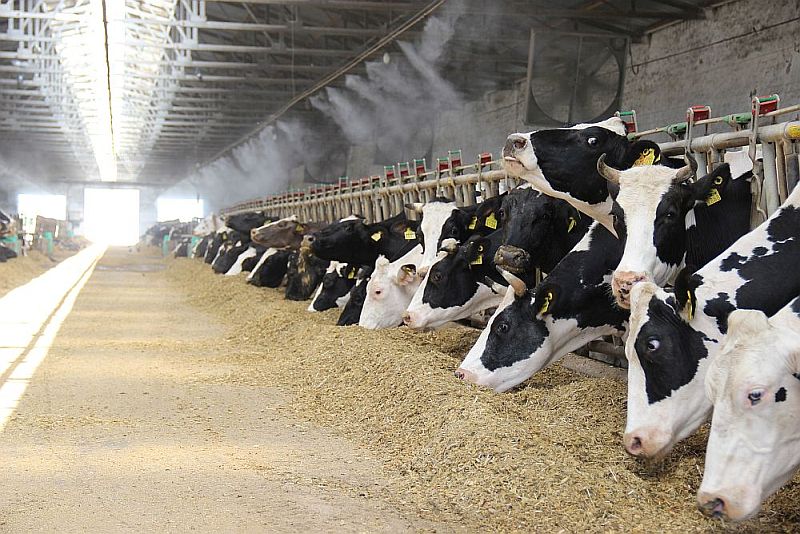 The experience of loose housing, developed at the milking complex «Goduvalnitsa-1», was used during the implementation of the «Goduvalnitsa-2» project. There is a 2×14 «parallel» with an extension of 2×18 (Beco), which works since 2012. The milking herd size is 650 cows. Average daily milk yield is 33 kg per cow. Livestock is kept in 5 barns (two new ones, others reconstructed). Manure separation equipment is installed.

The only dairy farm of AF «Mayak» with fixed housing, dairy herd is 450 cows. In two barns for dairy cows new milk pipelines (Interpuls) were installed, feed bunks were rebuilt, manure channels were deepened, chains for fixation were replaced by collars. Owners plan to install fans. Daily milk yield is 27 kg per cow. At all farms feed is distributed once a day — at lunch time, starting at 13.00. This practice is used for the third year. Managers consider the possibility of double feed distribution for fresh cows and peak of lactation.

The smallest calves for up to 70 days are kept in individual huts. The milk period lasts for 56−57 days. During this period a calf drinks 350 liters of whole milk (in the first week of life — young milk, then — pasteurized from problem cows). In the first hour after birth, each calf receives 4 liters of checked colostrum through the tube. The scheme of feedinf milk is the same for bulls and heifers.

During milk period, the youngstock is at the farm, and then go to the farm for growing completion. There groups of heifers older than a year are formed and are again transferred to the farm. From the end of May to the beginning of October heifers of 6−12 months age and heifers of the first period of pregnancy are kept at pasture.

Currently, normal semen is used for insemination, but there is a plan to use sexed semen, and part of the herd to be covered with terminal meat bulls to produce animals with the best slaughter qualities for their own processing. For accounting, herd management and feeding owners use automated programs.