During the three months of the war, Ukrainian dairy farms lost only at least 50 thousand cows. This was announced by the General Director of the Association of Milk Producers (AMP) Anna Lavrenyuk during the webinar «Dairy farming in war: problems, trends, practices», which took place on June 16, 2022.

Preliminary estimates of the analytical department of AMP coincide with the information from the report of Kyiv School of Economics. As of June 8, the estimated value of the dead domestic animals is over $ 136 million.

Animals die not only as a result of active hostilities, but also due to a number of restrictions on feeding, housing and veterinarian care. The estimated number of dead animals in the hit regions is 92 thousand head of cattle, as well as 42 thousand sheep and goats, 258 thousand pigs and more than 5,700 thousand birds.

Ten of 24 regions that were or still are in the zone of hostilities and occupation supplied 42% of milk for processing (see map of cows and milk production by the industrial sector). In total, about 800 industrial dairy farms were affected by the war.

Agricultural enterprises in the frontline and occupied territories reduced milk yields by more than 50%. Regions where the situation is relatively stable and secure at the beginning of the war also significantly begged for yields due to the destruction of supply chains. However, rather quickly the dairy farmers of the west and the center of the country managed to return to the pre-war level, and in some places to increase production. According to the General Director of the Association of Milk Producers, due to this, supplies for processing from industrial farms this year will be at the level of 2 million tons (for comparison — 2750.4 thousand tons in 2021).

War and milk map of Ukraine* 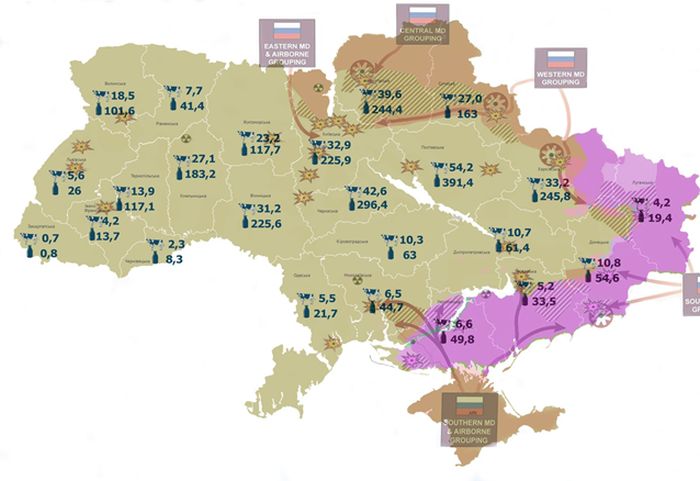